When it comes to the journey of marriage, there are numerous milestones to remember: the first date, the first kiss, and of course, the wedding day. The wedding band is one of the most important pieces of jewelry you and your partner will wear in your lifetimes, symbolizing your love for each other and serving as a constant reminder of your commitment. But what about those other moments that matter — such as the anniversaries along the way? How do you celebrate them? Anniversary rings are a popular choice for couples celebrating their marriages, symbolizing key milestones since the day you said, “I do.”

Typically, a spouse will give these rings on the 1st, 5th and 25th anniversary, with certain metals and gemstones used to mark the occasion. However, there are no set rules when it comes to these rings. In addition, there is no rule saying you can’t buy your spouse a ring for any anniversary, even if it’s not a milestone in the traditional sense. If you are looking for anniversary ring ideas, our anniversary ring guide below will help you find the perfect ring for your special day. 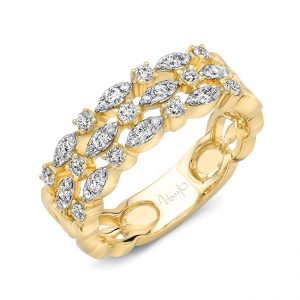 A one-year anniversary band is a beautiful way to commemorate the first 12 months of your marriage, and gold is a classic choice for this milestone. Uneek’s “Torchon” Stack-Illusion Diamond Band in 14K Yellow Gold is perfect for anyone who wants something simple yet striking, with its stack-illusion band featuring navette-shaped clusters that alternate with singular rounds. Also available in 14K white or rose gold, this band adds just enough bling to make a statement. 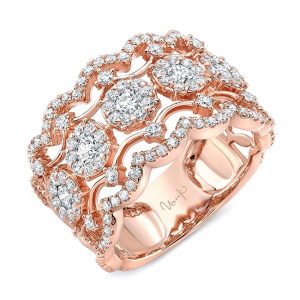 If you feel like your wedding was straight out of a fairytale, then your spouse will love a reminder of your dreamy day. Uneek’s “Valenciennes de Ghent” Open Lace Diamond Band in 14K Rose Gold is just what you need to recreate the magic of your nuptials — with elegant lace-like lines, scalloped edges, and graceful rows of brilliant-cut white diamonds. Crafted in 14K rose gold, this anniversary ring is sure to become a treasured keepsake. 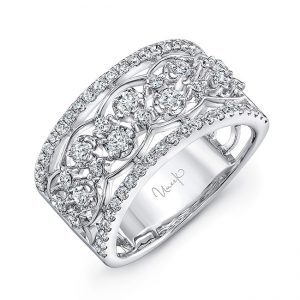 It might be the “silver jubilee” anniversary, but you need not limit yourself to silver jewelry for this milestone year. The brilliant shine of white gold in Uneek’s “Rosaline” Open Lace Diamond Band highlights its brilliant cut white diamonds, vintage-style design, and intricate filigree. Made with 14K white gold, this band is a fitting tribute to your 25th year of marriage.

How Do I Choose an Anniversary Ring for Her?

When it comes to an anniversary, nothing says “I love you” like a specially designed ring. If you are looking for an anniversary ring that’s as unique as your relationship, we have you covered at Uneek. From contemporary styles to classic designs and everything in between, we’ve got the perfect fit for any couple. With extraordinary detail, intricate craftsmanship, and stunning designs, each ring is not simply a piece of jewelry, but rather a work of art that will be cherished for a lifetime. Be sure to view our entire collection of anniversary bands to find the perfect anniversary ring for her.